God Save The Queen.... (She Weren't No Human Being) 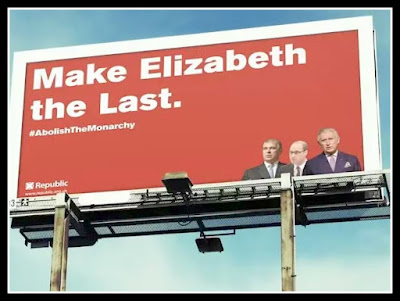 Royalty just ain't it used to be,
as this billboard makes amply clear...
(See links below!)

<i.>
On Monday, the world -- led by the Royal Family, among 2,000 ultra-high profile guests at Westminster Abbey -- will say its final goodbyes to Queen Elizabeth II, putting an official exclamation point to the British monarchy's longest and storied reigns. That saga came to a close on September 8, at Elizabeth's Balmoral estate, where she died at 96 -- ending a reign of 70 years, and 214 days.

Only King Louis XIV, of France, reigned longer (from 72 years, 110 days (May 14, 1643, to September 1, 1715). To put these records in perspective, even such famous royal icons as Queen Victoria, and Franz Josef "only" reigned 63 and 67 years, respectively. Of the lists that I consulted, Elizabeth is the only modern figure to grace them. The closest contemporary example is King Bhumibol Adulyadej, of Thailand, whose tenure (70 years, 110 days, from June 9, 1946, to October 13, 2016) earned him third place.
And those examples are simply monarchs of states that were internationally recognized as sovereign for most (or all) of their reigns. If you include monarchs who weren't sovereign for most of their reign, the record holder is actually King Sobhuza II, of Swaziland. He ruled over Swaziland for 82 years and 254 days, from December 10, 1899, until his death, on August 21, 1982.
No one will ever break that record, I suspect, unless future monarchs find ways of cloning themselves -- or sign on for one of Elon Musk's transhumanist schemes, to interbreed man and machine. God knows, Elizabeth's successor, King Charles III, may even fund such a venture, having waited his entire adult life for the world to stop calling him "Prince." On a basic level, that must feel good, I'm sure.
On the surface, Elizabeth's funeral, and the inevitable wall-to-wall coverage it'll kick off -- starting at 11 a.m., British local time -- seems like business as usual for a nation long fed on a steady diet of imperial pomp and circumstance. That status will ramp up considerably for Elizabeth, of course, given her longevity. Waits for a glimpse of the royal coffin are now averaging 24 hours; if that metric is any marker, Brits just can't get enough of the whole spectacle.
And yet...and yet...and yet: is there really a place for it anymore? Doesn't the whole notion of some royalist clan, jet setting around the world, doing whatever vague things that they do, seem too absurd for words? Surely, all the money that's being spent to prop up the whole business could go toward better pursuits, right? 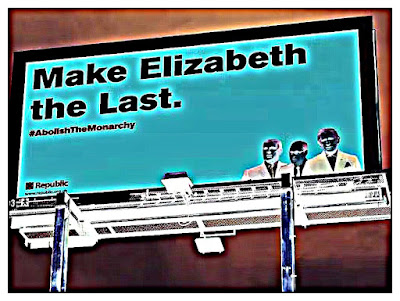 <ii.>
I posed the above questions to my newly-minted colleagues at the University of London, on my arrival there in the fall of 1990. Like any non-native, I couldn't resist popping the question: how could the concept of kings and queens, with servants always traipsing three paces behind them, coexist in a country that gave us punk, postpunk, and rave culture?
The responses I got ranged from the pragmatic ("The Queen is a useful diplomatic tool, especially in international crises"), to the social ("For many people, it's a symbol of what it means to be British"), and the purely world weary ("It's carried on so long, I can't imagine it coming to an end, honestly").
Still, as one of my workmates pointed out, the royalist imagery that fuels papers like the Sun meant something different in Ireland. Although Bill came from Dublin, not the strife-ridden North, he cited a more basic reason for abolishing the monarchy, or at least, severely trimming its massive estates, financial holdings, and staffs.
"After all, we were a colony, which made us part of the British Empire -- just like Asia, Africa, Australia, and India, and too many other places to count," BIll pointed out. "We didn't like it anymore than they did. And we still don't, really." 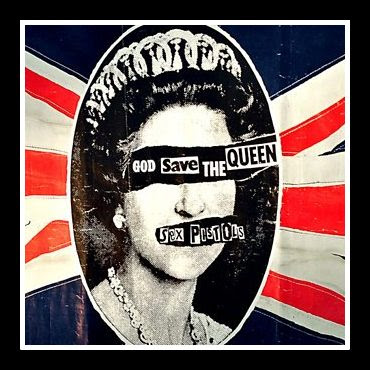 
<iii.>
Of course, I can't cover this topic without mentioning one of the most famous anti-royalist anthems, "God Save The Queen." Originally titled "No Future," the Sex Pistols' second single arrived on May 27, 1977 -- just in time for the twenty-fifth anniversary Silver Jubilee celebration of Elizabeth's reign.
Not surprisingly, the song's scabrous anti-royalist blast ("God save the queen, the fascist regime/They made you a moron/Potential H-bomb") pushed varying sets of buttons, including attacks with iron bars and razor blades, respectively, against Sex Pistols drummer Paul Cook, and singer John Rotten/Lydon, the man who'd penned the lyrics ("God save the queen/She ain't no human being/And there's no future, in England's dreaming").*

The media establishment and music industry reacted by slapping a ban against the single. Widely considered the top-seller of its time, the No. 1 spot stayed blank all throughout Silver Jubilee week. That's an extraordinary response to a record that simply voiced a commonly-held resentment, as Lydon himself observed in August 1977: "Turn the other cheek, and you get a razor through it" (an ironic comment, indeed, coming only a couple months after his attack).
"God Save The Queen" struck a chord in unusual quarters. William Burroughs, the father of postmodernism, sent the Pistols a congratulatory letter. Bob Marley tipped his hat to the movement with a 12-inch single, "Punky Reggae Party," though the Pistols didn't make its roll call of attendees ("Wailers will be there/The Jam, the Damned/The Clash!") -- quite an artistic departure for someone, by all accounts, who didn't count himself a fan of loud, guitar-driven music.
In recent years, the Pistols have offered contradictory recollections of the song that sealed their reputation. Cook has claimed the Jubilee didn't inspire it ("We weren't aware of it at the time") -- an odd statement, given the timing of the single. Bassist Glen Matlock, the song's co-author, claims to have nothing personal against the Queen, "but I do think she's a bit of a sop to what's going on," he told "Good Morning Britain" viewers this year.
By contrast, Lydon has muted his original views considerably, as he acknowledged on "Piers Morgan Uncensored," last May: "I'm actually really, really proud of the Queen for surviving and doing so well. I applaud her for that. That is a fantastic achievement. I’m not a curmudgeon about that. I just think that if I’m paying my tax money to support this system, I should have a say so on how it’s spent."
The most straightforward view, perhaps, comes from the man behind all those overdubbed storm squalls. "I've never had any connection to the monarchy, to be honest," guitarist Steve Jones told the Independent in June. "It meant nothing to me, it still doesn't. So to me, it was just a laugh, just a giggle." The irony of the wayward guitar being the most consistent storyteller needs no further elaboration. 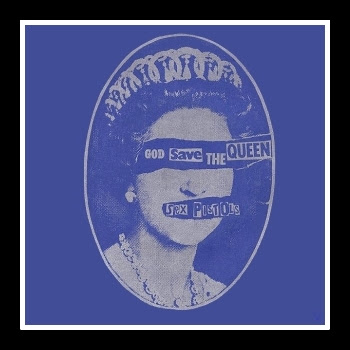 
<iv.>
The Royal Family, and what to do about them, remains a tricky subject to navigate. That's one conclusion I've drawn from Lydon's public turnabout, a move that's drawn pointed criticism from outlets like Vulture, in panning his public statement on Elizabeth's passing: "We don't know if he means it, man." (And that's one of the milder rebukes I've run across.)

Lydon's readiness to join photo opps with the likes of Nigel Farage, one of Brexit's prime movers, strikes many believers as a stunning comedown for someone they often saluted as speaking truth to power, no matter what. He may not be a radical leftist, the argument ran, but he's a willful anarchist. That's even better, and that makes him still one of us.
Or does it? As I've pointed out online, the 66-year-old punk icon who claims the sunny shores of Venice, CA as his primary home -- and continues to main a second one in London, while holding British, Irish and US citizenship -- has come a fair distance from the 21-year-old who once howled, "No future, no future, no future for yooouuu!"

That distance becomes even more apparent in late '80s lyrics from Lydon's major post-Pistols band, Public Image, where a sour reactionary streak began to make itself felt in songs like "The Body" ("Cathy, go home, forget your daughter/In a welfare state, she'll be well looked after"), and the B-side, "Selfish Rubbish," which targets the leftie crowd ("Everything in life should be free/Except the bits that belong to me").

Even so, I don't recall any reviews mentioning it, nor any interviewers pushing back against it. A little bit of mystique still goes a long way, doesn't it? It's a quality that Lydon ironically shares with the Queen he now admires so visibly. It's this factor, royal biographer Clive Irving believes, that explains the monarchy's persistence, amid all the common sense arguments voiced for getting rid of it: 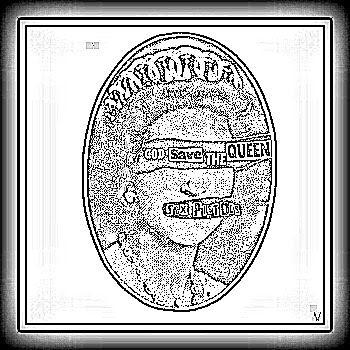 <v.>
The problem with Charles, as Irving further argues (see link below) is that we know him all too well -- through his numerous, well-chronicled foibles and faceplants. In stepping up to the monarchial plate, as it were, Charles will have to call on a wealth of political and PR gifts than he's shown so far:

"One problem is that he doesn’t look like an invigorating generational shift, does he? That’s what would be needed, something that reinvigorates and sends a sense that they’ve understood the modern world. In some ways, Charles looks older than the queen. He’s a man more suited to the 18th century than the 21st, and I’m not being facetious about that. That’s his deliberate and chosen style, like a younger brother of the queen rather than a son."
Splitting the difference won't do, either as the Jesus and Mary Chain's brotherly duo, Jim and William Reid, learned in the summer of 1986, when they sat down for a provocatively-titled Smash Hits feature ("Should We Scrap The Royal Family?").

To the consternation of Creation Records boss Alan McGee, after much hemming and hawing, the Reid brothers voiced a desire for dethroning the royals without violence. ("Safe, rare and legal," anyone?) "It was the Pet Shop Boys' Chris Lowe, of all people, who said what McGee had expected the Reids to say: 'They should be publicly executed.'" (The Creation Records Story: My Magpie Eyes Are Hungry For The Prize: David Cavanagh, Virgin Books, 2000)

"And therein lies the rub," to lift that misquotation from Shakespeare's "Hamlet" -- that the monarchy's fate rests with the man widely viewed as the least suited for the job, as Irving suggests ("I think there’s a really real risk that if Charles does succeed her that the monarchy will go over a cliff very fast"). Whether someone will create a worthy successor to "God Save The Queen" remains to be seen.

In the end, the opaque inscrutability that Elizabeth cultivated so eagerly, managed so adeptly, and worked so relentlessly, may yield the seeds that finally lead to the winding down of the monarchy that she represented so loyally, for so long. It's an irony that only an enigma might appreciate. --The Reckoner

Links To Go
(Wave Goodbye To Elizabeth, My Dear):

Down WIth Tyranny: Britannia Rule The Waves,
Britains Never Never Shall Be Enslaved...Just Enslavers:
https://www.downwithtyranny.com/post/britannia-rule-the-waves-britons-never-never-shall-be-slaves-just-enslavers

The Independent: "Make Elizabeth The Last,"
Anti-Monarchy Campaigners Urge
Ahead Of Platinum Jubilee:
https://archive.ph/UqjJt
Vanity Fair: Could The British Monarchy
"Go Over A Cliff" After The Queen Dies?:
https://www.vanityfair.com/style/2021/01/clive-irving-the-last-queen-interview

Crass: Do They Owe Us A Living? (Lyrics Video):
https://www.youtube.com/watch?v=zXh0Xw0KQ6I


<A Royal Footnote>
*These lyrics, incidentally, are incorrectly cited in Stephen Davis's otherwise excellent biography of Bob Marley (1983), which renders them thusly: "God save the queen/And her fascist regime/She made you a moron/And England's screaming!" Proof positive, if you need it, that it's possible hear to whatever you want under a squadron of screaming guitars.
Posted by Ramen Noodle Nation at 8:53 PM