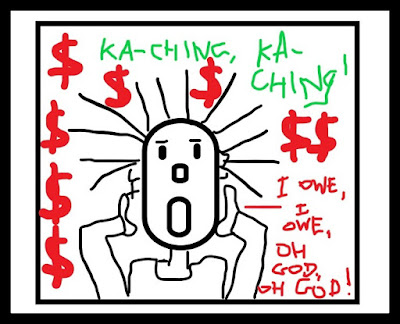 Time will tell if the Biden administration works up the gumption. Even so, his predecessor, Donald Trump, and former "Education Secretary," Betsy DeVos, postponed student debt repayment deadlines three times, as Debt Collective organizer Astra Taylor notes in her piece (see below). Though it's fine that Biden has extended the deadline again, to September 21, continuing "a flawed Republican policy is hardly a victory," Taylor states, in part.

Biden doesn't help matters when he suggests that struggling borrowers should rely on parents, or sell their homes, "a luxury those without intergenerational wealth cannot afford," Taylor scoffs. At times, his reading of the facts seems downright muddled, such as his willingness to tout options that fail borrowers, like the notorious Public Loan Service Forgiveness program, which rejected 95 percent of its applicants.

Student debt has reached alarming levels in this country. As of January 2021, 44.7 million Americans hold an estimated $1.71 trillion in student debt, or twice the total level of credit card debt. That's an eye-popping figure, fueled by extreme cases like Seth Koeut, a Cambodian refugee who convinced a federal bankruptcy judge in December 2020 to wipe out 98 percent of his medical school debt ($440,465).

What makes Kouet's case noteworthy, other than the mountain of debt that nearly swallowed him whole, is that he still got screwed, even as he dutifully followed the standard life script ("College pays off," "Education is the answer," yada-yada-yada). His educational odyssey included bachelor's degrees in marine biology and Spanish from Duke University (2002), and a stint studying clinical tropical medicine in Bangkok.

Koeut wrapped up his education at the for-profit Ponce School of Medicine in Puerto Rico, in 2010. But Koeut never gained a residency placement, something that happens to roughly 10,000 medical school graduates per year. He then worked a series of part-time McJobs (Banana Republic, Bloomingdale's, Crate & Barrel, dishwasher in a Mexican restaurant) before he finally threw in the towel in 2015, and initiated the long road to his bankruptcy relief.

Yet students like Kouet often face a stunning lack of empathy. The Department if Education argued against clearing most of Kouet's debts by suggesting that he hadn't "given his best effort to find better employment." Thankfully, the court didn't buy it, as its reasoning made clear: "A medical school graduate who works as a parking lot attendant and dishwasher cannot be described as lazy." You'd think, right?

Howie Klein sums up the situation well in a post ("The Student Snake-Oil Scam") on his Down With Tyranny blog. Education used to be considered as a path to upward mobility, one that's turned seriously sideways, as Klein points out: "In the last couple decades, it has instead turned into a path to permanent debt penury and financial servitude."

<ii.>
The collateral consequences of that penury and servitude are endless, and well-documented. Debt-burdened graduates often end up postponing major life decisions like cars, houses and kids. Massive monthly  repayment schedules leave little or no room for necessities, let alone the serious business of saving for retirement. Only 33.3% of Americans finish their four-year degrees, yet even their future is hardly rosy, with so many jobs paying essentially the same as they did 20 years ago, as my comrade in arms, The Squawker, points out.

Yet the same strawmen are still peddling the same tired arguments against canceling student debt, from the standard boilerplate line ("It would only help the rich"), to the speculative ("The federal government would lose too much money"; "It won't help the economy"), to the downright defeatist ("It won'f fix higher ed overall; it won't help those who didn't go to college").

I'd offer a simple rejoinder to all of those bromides:

Even if any of them were true -- and they aren't -- do we really want to perpetuate a debt-based higher education model, with all the implied social costs? With so many millions struggling under crushing repayment schedules, does it really matter if they racked up their debts at a state school, or a private one?

We also need to deal with the "The What About?" argument, as in, "What about me? I busted my ass to repay my loans, why should I pay for everyone else who can't pay theirs?" That rests on the classic American notion of "bootstrapping" -- "I pulled myself by my bootstraps, so why can't you?"'

You know we've become a truly twisted society when we wax anxiously about, "What happens if we make life better for others?" Aside from the obvious rejoinder (Isn't that what government's for?), such notions rest on the premise that giving people support, no matter how badly they need it, makes them weaker and more dependent. Take them off the hamster wheel, and they might lose their edge. Or some crap to that effect.

<iii.>
But here's the rub. The loudest advocates of bootstrapping often had somebody else pulling the strings for them. Our sociopathic ex-President, Donald Trump, is the classic example. His wealth rests on the connections and money that his reptilian father, Fred, engineered, largely before his voice changed.

When cash-strapped Donald entered the real estate game, his father set up the multimillion dollar loans that made his presence possible, and helped transform New York City into a giant Monopoly board, at its non-wealthy residents' expense. When Trump's dream of Atlantic City as a gamblers' paradise started going south, his dad jumped in, and discreetly bailed him out.

In other words, the price of admission for the rich and the mega-rich is way, way different than the rest of us: no bootstraps needed. For them, it's simply a case of making the right call, or flashing the right amount of cash, to make whatever headache they're facing disappear, as Lori Loughlin demonstrated, in showing her willingness to pay $500,000 to get her two daughters into USC, on the pretext of joining the rowing team.

These indiscretions earned Loughlin and her husband a mere two months in prison, plus the usual community service/supervised release model of legality, and $400,000 in fines, which they'll probably write off next year, as they move on to the next quarter of their lives. Their daughters remain enrolled at USC, they've never joined the rowing team, and while their various business ventures have been disrupted, they'll probably find someone else willing to roll the dice. No bootstraps needed.

Suddenly, the strawman argument ("But canceling student debt would only hurt you") looks a hell of a lot less impressive, if we consider one simple fact. We've been subsidizing the Loughlins and the Trumps of the world all along, for far too long. That should be reason enough to pull the plug on the edu-debt scam, and start over from scratch.

If nothing else, canceling student debt would provide a major stimulus in itself. Instead of allowing banks and the feds to skim off the interest, the money could actually go back into the economy, or the indentured edu-debt class could actually set some aside for themselves -- what a radical concept, eh?

Again, time will tell if the political class finds the gumption to actually allow it, but we shouldn't wait for them anymore to find it. We've waited too long as it is. And not stop raising hell, publicly, privately and politically, until they do. --The Reckoner

Down With Tyranny:
The Student Debt Snake-Oil Scam:
How America Uses Education
To Expand Poverty And Hurt The Economy:
https://www.downwithtyranny.com/post/the-student-debt-snake-oil-scam-how-america-uses-education-to-expand-poverty-hurt-the-economy

The Guardian:
Biden Is Already Backtracking
On His Promises To Provide Student Debt Relief:
https://www.theguardian.com/commentisfree/2021/feb/25/joe-biden-student-debt-american-students

Email ThisBlogThis!Share to TwitterShare to FacebookShare to Pinterest
Labels: college is a racket, edu-debt explosion, higher education is a joke, student loan scam